If You're at an Organized Course

If you are taking one of the formally organized courses, everything has been set up for you on the provided laptop. The only thing you will need to do is run the following commands in every new terminal window (aka shell) you open throughout this tutorial. Copy and paste the commands below to get started:

These two commands set the SUBJECTS_DIR variable to the directory where the data is stored and then navigates into the sub-directory you'll be working in. You can now skip ahead to the tutorial (below the gray line).

If You're Not at an Organized Course

If you are NOT taking one of the formally organized courses, then to follow this exercise exactly be sure you've downloaded the tutorial data set before you begin. If you choose not to download the data set, you can follow these instructions on your own data, but you will have to substitute your own specific paths and subject names. These are the commands that you need to run before getting started:

Information on how to source FreeSurfer is located here.

If you are not using the tutorial data, you should set your SUBJECTS_DIR to the directory in which the recon(s) of the subject(s) you will use for this tutorial are located.

This tutorial is designed to introduce you to the "command-line" group analysis stream in FreeSurfer. While this tutorial shows you how to perform a surface-based thickness study, it is important to realize that most of the concepts learned here apply to any group analysis in FreeSurfer, surface, volume, thickness or fMRI. Here are some useful Group Analysis links you might want to refer back to at a later time:
FSGD Format
FSGD Examples
DODS vs DOSS

The data used for this tutorial is 40 subjects from Randy Buckner's lab. It consists of males and females, ages 18 to 93. You can see the demographics here. You will perform an analysis looking for the effect of age on cortical thickness, accounting for the effects of gender in the analysis.

In this tutorial, we will model the thickness as a straight line. A line has two parameters: an intercept (or offset) and a slope. For this example:

Parameter estimates are also called "regression coefficients" or "betas". To account for effects of gender, we will model each sex with its own line, meaning that there will be four linear parameters:

In FreeSurfer, this type of design is called DODS (for "Different-Offset, Different-Slope").

You can either create your own design matrices, or, if you specify your design as a FreeSurfer Group Descriptor File (FSGD), FreeSurfer will create the design matrices for you. The FSGD file is a simple text file you create. It is not generated by FreeSurfer. See this page for the format. The demographics page also has an example FSGD file for this data.

Exercises to try on your own:

Information on how to create/view text files can be found here.

You can open the FSGD file for this tutorial (gender_age.fsgd) in a text editor such as gedit (for Linux) or open -e (for Macs).

A contrast is a vector that embodies the hypothesis we want to test. In this case, we wish to test the change in thickness with age, after removing the effects of gender. To do this, create a simple text file with the following numbers (if you're using the tutorial data, this has already been done for you):

Open the contrast matrix file (lh-Avg-thickness-age-Cor.mtx) in a text editor. Remember, this file is located in the glm directory.

In the case that you have not cached the data, you can use the two commands below. The commands below only create output for unsmoothed data and data smoothed to 10mm FWHM.

Do not run this command if you're at an organized course.

It can take a while and the data has already been pre-processed for you.

When this command is finished the glm directory will contain a sub-directory called lh.gender_age.glmdir. There will be a number of output files in this directory, as well as other subdirectories. Run:

and you will see the following files (descriptions are also included below, but don't show up in your terminal screen):

NOTE: You may also see some temporary directories (with names starting with tmp) or log files, which you can ignore.

There will be a subdirectory for each contrast that you specify. The name of the directory will be that of the contrast matrix file (without the .mtx extension). For example, to inspect the lh-Avg-thickness-age-Cor directory, run

and you will see the following files:

View the uncorrected significance map with freeview. First, make sure you are in the correct directory:

Then, run this command to visualize the data:

This command opens the left hemisphere inflated surface with the aparc annotation shown as an outline. The overlay sig.mgh is also loaded with a threshold of 4.

You should see something similar to this: 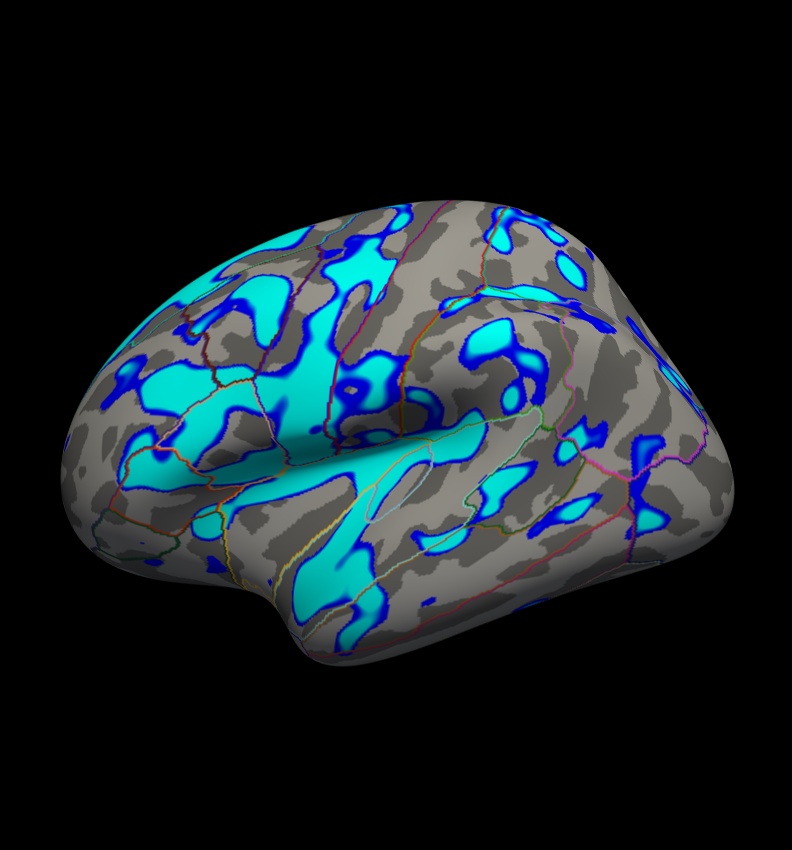 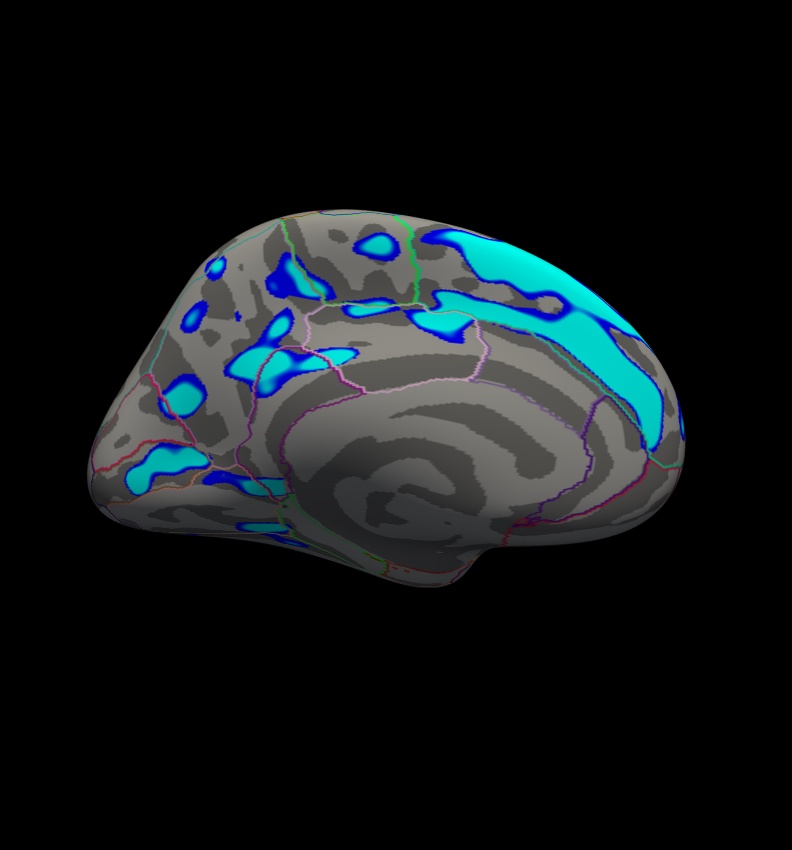 This figure displays the correlation between age and cortical thickness with a threshold of 4.

Viewing the medial surface, change the overlay threshold to something very, very low (say, .01), by clicking Configure (under the Overlay dropdown menu that says sig.mgh) and set the Min value to 0.01. Click Apply, or check the Automatically apply changes checkbox. 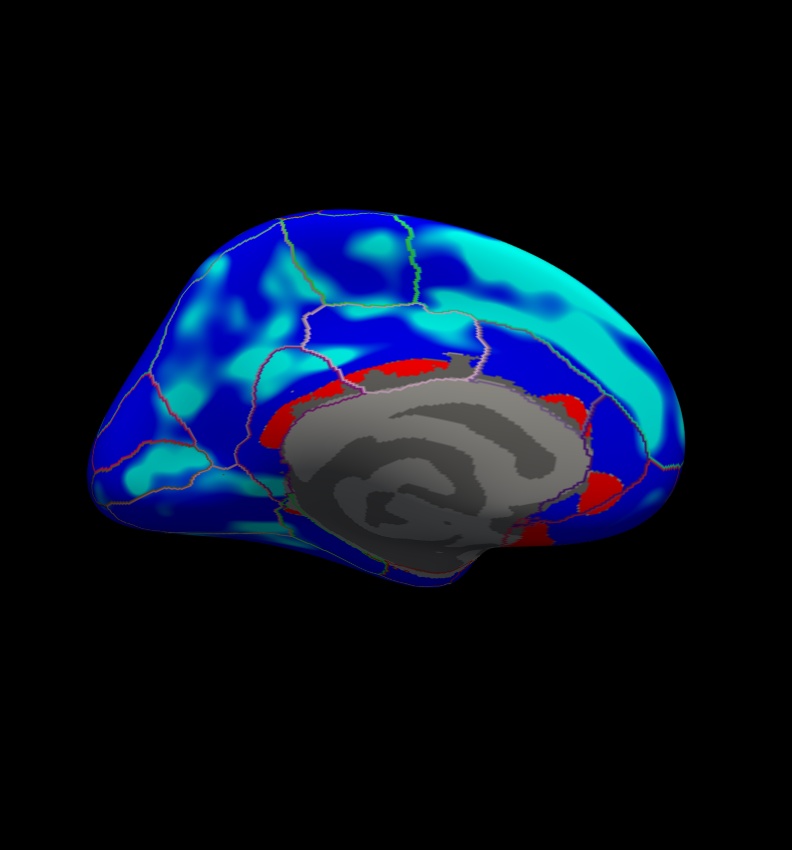 This figure displays the correlation between age and cortical thickness with a threshold of 0.01.

Text output and log files can be opened in any text editor.

Goal: To practice setting up an analysis on subject surfaces to test an experimental hypothesis.

Your goal is to create a new contrast file and alter the commands you used above to examine this new hypothesis. You will then open the new sig.mgh overlay which will highlight significant differences found. 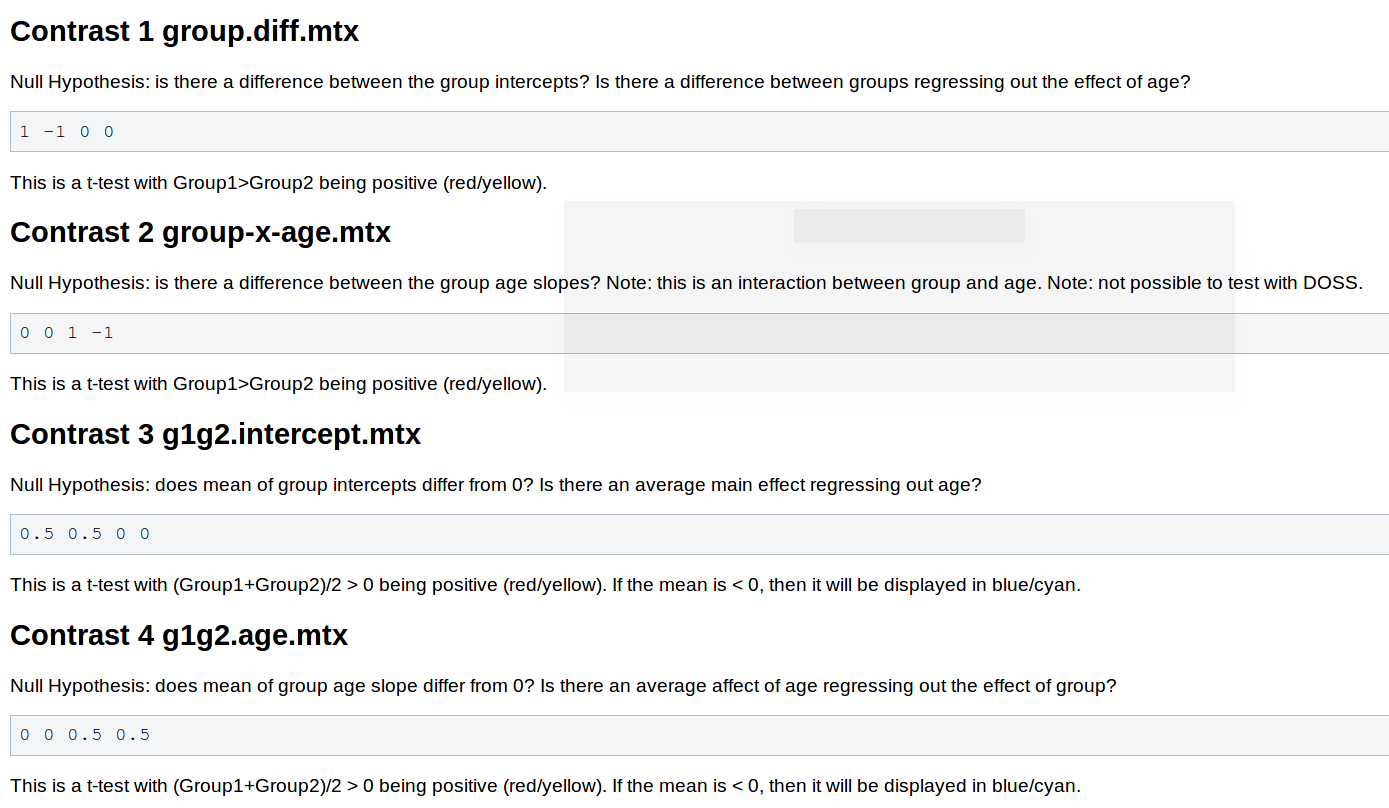 Want to know the answer? Highlight the text below

By the end of this exercise, you should know how to:

You can test your knowledge of this tutorial by clicking here for a quiz!

Back to list of all tutorials Back to course page