Differences between revisions 16 and 17

There are currently two scientific Python installations available at the Martinos Center. The more recent instillation is based on the Enthought Python Distribution (EPD). Users of the older "Legacy Scientific Python Installation" are encouraged to switch to the EPD based installation, as it is more actively supported and contains more up to date packages.

If you use Python, make sure to sign up for the martinos-python mailing list to receive updates regarding the Python installation and discuss Python related issues.

or if you use Bash

After this, you can run Python scripts by typing something like

For an integrated development environment specifically created for scientific Python type (in a bash/tcsh, not IPython)

this will start Spyder, which lets you edit, run, and debug Python scripts. For new Python users, the built in help is a also very useful. 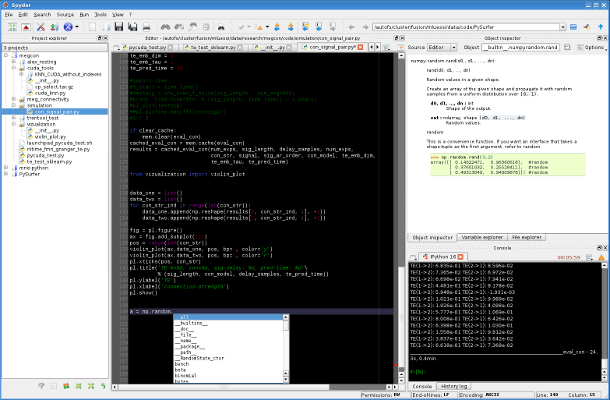 EPD comes with a large number of Python modules; an exhaustive list can be found here. In addition, the following neuroimaging related modules are installed:

* pydicom enables you to read, modify and write DICOM files with python code

If you know of other modules that should be made available to all users, send an e-mail to the martinos-python mailing list

The following table aims to give a complete list of all installed EPD versions and modules. The currently stable version is epd-7.2-2-rh5-x86_64. A different version can used by typing

where EPD_VERSION is one of the installed EPD versions.

The "system Python" ( the Python version which already exists in the system ) is not tampered with due to the following reasons:

Note: strongly recommended. this line can/should be put as an alias in one's ~/.cshrc in the following way:

Once, this is done, the user can just type pyactivate to activate the scientific python mode and type deactivate to get back to the default ( normal system python mode )

Note: The sourcing script works under tcsh shell. Bash is currently unsupported but will be if there are enough users using bash.

Note : The list of modules indicated by (c) are compiled modules and the rest were installed using easy_install script.

A program called virtualenv is made use of to isolate the Pythons. virtualenv enables one to totally switch to a different Python with its own modules ( enabled by the switch --no-site-packages). So when the user sources the tcsh_activate script, what he/she is effectively doing is to prefix the system PATH, PYTHONPATH, module PATHs with the custom Python's paths and when the user deactivates he/she gets back all the default paths. virtualenv takes care of this complex paths manipulation behind the scenes. It also makes the modules installation a breeze for the administrator.